When a cycle of protests begins, breaking into the public space as the one that began on 1 April 2017, the first thing we asked ourselves was, what were the new meanings and senses this collective event was expressing as part of the political struggle that had been developing in Venezuela.

As soon as the first protests took place, we began to register from its most characteristic aspects to try a complex contextual understanding of what was happening. Soon, we realised that we were facing a phenomenon that was growing and expanding in several cities in the country, so we began to sharpen our gaze to focus on its socio-political significance and its sensing projects. Particularly, in their projects of resistance to the tense and threatening authoritarian contexts, as well as in the processes of democratisation and construction of citizenship that they promoted, considering their achievements, their incidence, their continuity, potential and scope.

We present below some notes, critical reflections and comprehensive bets referring to this significance, which aim to contribute to the debates, studies and understanding of the 2017’s protest cycles.

√ Provisional context and unrest: In the middle of a deep social, economic and political crisis, sentences 155 and 156 of the Supreme Court of 28 March 2017 acted as a trigger that deepened the discontent with the pretensions of dissolving the National Assembly by divesting it of its functions and parliamentary immunity, endowing the President of the Republic with exceptional powers – and the court itself – over and above the Constitution and the laws. This was interpreted as a new and dangerous onslaught of the authoritarian project. The “sense of injustice” -as part of the interpretative frameworks that guided collective action-, of disrespect toward the popular will by suspending the constitutional order, of grievances to the democratic life of the country, constituted one of the most relevant aspects that began to give significance and meanings to the citizen rebellion that had been growing.

√ Authoritarian context, violence and repression. Did the protests fail? The ferocious repression of the Venezuelan State, in its attempt to control and stop the protests, acting jointly with allied paramilitary forces, shaped and conditioned in large part the arising, boom and end of the cycle of protests. This also had an impact on the use of violence against repressive forces by minority groups of protesters, who, encouraged by an interested and enthusiastic epic-heroic discourse, fomented the confrontation and the escalation of violence, often overshadowing the massive, plural, civic and peaceful nature of the citizen protests.

A great sorrow in the collective subjectivity produced the 133 deceased and their families (out of which 101 people were killed directly during the demonstrations, according to data from the NGO Venezuelan Criminal Forum); over 5,000 arbitrarily arrested; more than 4,000 injured and 700 civilians presented before trials in military courts during the year 2017; hundreds of political prisoners and their suffering families… At the end of the year 2017, it prevailed the analyses that qualified the citizen protests as a great failure due to these tragic events and because they did not achieve a political change. This reduced look to the unleashed violence and its “results” distort their ends and nature, attributing the problem in many cases to the political-partisan objectives that are not their own as part and expression of social power under construction, which has unfairly and/or interestingly dismissed the relevant achievements, scope and significance of citizen protests.

√ The protests, as sounding boards of the unrest, arose in the first instance to question, denounce and demand the Venezuelan State and the national government for respect toward the Constitution; respect for civil and political rights; restitution of democratic order and the rule of law in Venezuela.

Its fundamental objectives were, at first, to express the disagreement, the discontent, the indignation toward the decisions taken by TSJ, violating the constitutional order; the blocking of political rights -by suspending the recall referendum and postponing regional elections in 2017-, due to the climate of persecution and oppression.

As they developed, the objectives of the protests were focused on summoning Venezuelans to mobilise and concretise initiatives to consult the popular will, trying to open a peaceful and democratic route to political change. We can say that all of these objectives were met with great success, whose most outstanding achievements were to make visible the axis of meaning of the conflict and challenge the responsibilities of the rulers from all Venezuelans in the rescue of the democratic life of the country.

√ Tension over democratisation or non-democratisation: The holding of mass demonstrations, almost day in and day out, taking the public space with strength and determination during four months (122 days), managed to alter the routines of the country’s daily life during that period and draw the attention of the international community with great political incidence on the whys of the citizen claim and the deep socio-political crisis. We can say, then, that civil society responded to the dynamics of non-democratisation and to the state of exception imposed by the government with its own way of creating an exceptional situation of citizen rebellion for democratising purposes as part of the political struggle.

√ Tension between the political and the civic agenda: The political agenda that was imposed from the beginning was questioned by several citizen organisations and initiatives that participated in the protests due to the predominance of their polarising and confrontational logic, which affected public discussions about the leadership and political management of the same. This tension revealed the inability to articulate both agendas, in part due to the rejection and disqualification of political parties from the possibilities and strengths of citizen power, and on the other, due to the fragmentation of social forces; the weak organisation and incipient articulation of citizens’ initiatives and their diffuse leadership.

√ Symbolic potential, human and democratic values: The protests were meant as a “wall of contention” to authoritarianism carried out by “a society in march and transition” of predominantly civic and peaceful character. We can describe them as civic demonstrations that revealed the strength of moral and civic reason with a great sense of dignity, democratic conviction, integrity, determination, commitment, responsibility and courage of the citizens who participated in them.

√ The emergence of diverse organisations and unprecedented citizen initiatives was an extraordinary result of the cycle of protests. These contributed new content with a critical and political approach, enriching and diversifying the repertoire of collective action along with its interpretative frameworks, thus strengthening the exercise of social power and its political incidence. It would be worth highlighting among them the citizen movements DALE LETRA (give word in English), LAS PILONERAS, CITIZEN LABORATORY OF NON-ACTIVE VIOLENCE, VENEZUELA SE LEVANTA (Venezuela stands), BUSTV and BILLETE ALZAO (Money up), initiatives that start from the active non-violent resistance as a fundamental philosophical and political framework of collective action fundamental for the collaborative practice with democratising objectives and focus on the post-conflict, modelling a mediating action, peacemaker, plural, inclusive, supportive, problematising and questioning of the responsibilities of the political and social actors.

Throughout the year 2017, they continued to be very active, having an important presence and significance in the public space, betting on social dialogue, social organisation and participation, as well as the articulation on social networks in order to strengthen the social fabric and the democratic coexistence.

√ The referendum of 16 July 2017 became an unprecedented collective act of national non-violent resistance, thanks to an alliance between social organisations, ordinary citizens and opposition political parties, which succeeded in 7.6 million Venezuelans who mobilised to express themselves, after three and a half months of protests. This act of protest was a milestone in the cycle of protests, demonstrating the will and civic vocation of the citizens who participated and their choice for a peaceful and democratic resolution of conflicts.

Towards a new cycle of citizen protests.

Protesting is an exercise and instrument of political expression and participation, essential when the government and/or the State are not sensitive to the citizen’s claim; preventing the possibilities of a full life, when they no longer guarantee the protection of human rights and democratic life as in the Venezuelan case.

The protests, when conceived as a device of democratising processes, become a laboratory of culture and civic praxis, very useful for the dynamics of transition and political change. The 2017’s protest cycle has been a valuable experience of social growth and learning, the germ of a citizen movement under construction that must continue to be thought, strengthened and articulated with all the social and democratic political forces to resist and stop the authoritarian project that threatens Venezuela. To prevent the continued imposition, above all, of military reasoning over civil reasoning. So that the voice of Venezuelans who want peace, justice and democracy will never be shut. 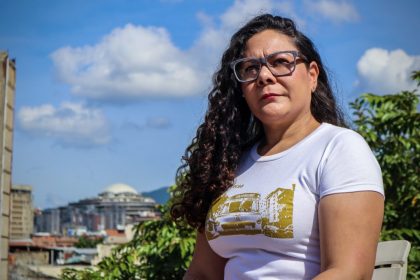